Last post by priyanshu12 - Today at 01:24:43 AM
For the best results when cleaning your rubber floormatscleaner, use a vacuum, Mat ReNew Cleaner and Protectant, and a hard scrubbing brush with a drill attachment. To start, vacuum the floor mat to get rid of any loose debris, sand, or pollutants.
#2

Last post by amarullio - Yesterday at 05:56:22 PM
What are the pros of a propane fridge? Is it more durable, or can you refill it when needed? Or why would people want to use a fridge with propane inside?
I think you might need an HVAC technician to help you with this refrigerator's maintenance. And the Salary of HVAC Technicians by State, so you need to take into consideration how much you would probably be charged at the end. Such professionals are in high demand now, and they manage to make some good money because people try to become more independent from the grid, which is more expensive and less reliable now.
#3

Last post by amarullio - Yesterday at 05:54:25 PM
These power sockets look so neat. As an electrician, I might use this software to show my customers what the finished work would approximately look like. It would be more convincing than just words.
Now I have way more customers than I used to have during COVID because all the construction work almost stopped back then, and I had only a few houses to finish. The entire Process of becoming a fully licensed electrician didn't prepare me for having any job and not knowing what to do with my knowledge. Thankfully, I am an essential worker, and I got more possibilities to move from the government. And now, finally, I have way more orders.
#4

Last post by prepedignahar - Yesterday at 08:44:13 AM
Looks really nice and the nature around it is astonishing. It's the kind of house I would love to live in. but I don't have $300k yet. Need to safe up a bit more, and then I will buy a house in a remote area too. I am too tired of the cities I used to live in, and now I just want a quiet place.
Need to do some more research on what the offers in the modern market are. I have seen probereality.cz to have some nice houses for sale in the Czech Republic. I wanted to move to Europe anyways, and it might be a good opportunity. Living in other places on the planet is a magnificent experience.
#6

Owner-Builder Projects / Re: Okanogan - Transforming A-...

Last post by OlJarhead - September 28, 2022, 02:23:36 PM
I used the pink foam in the roof of my super insulated room.  Basically I framed the room normally and insulated it with R21, then ran the pink foam board over the roof and screwed down another layer of sheathing over the foam.  Then roofed it over that.  This added another R10 to the roof (plus I guess R1 for the sheathing) and then did the same on the walls with furring strips to nail the siding too.

This has served me well!
#7

Got the tractor back (after getting it fixed) and a new grapple to make life easier on our thinning project and well, a lot of other things at the property.
Cheers!
Erik
#8

Last post by pmichelsen - September 23, 2022, 02:29:11 PM
I was kind of at a stand still on the house project, I had passed my underground inspection on a Tuesday, but my pumper wasn't available until the following Wednesday. So I had a weekend where I couldn't do much at the house, so I decided to go up late on a Saturday night and work Sunday on my little project.

I got up to the cabin at around 11:00pm Saturday night and made my way to bed around midnight. Unfortunately my buddy had rented his cabin to someone so I didn't want to start working too early. The dog and I headed out to start working around 7:30 and after mixing the first two bags it quickly became obvious that I did not have enough concrete to do both footings

. I had forgotten how deep I had dug them and the footing I started with end up taking 11 80lbs sacks and I only brought 12. I had four smaller 60lbs sacks in the garage, but that still wouldn't have been enough to finish. So I guess I'll finish the next time we come up. Turned out that I knew the family renting my buddy's cabin so I chatted with them for a few hours, then the dog and I hit the river for a quick swim and by noon we were on the road headed home.

In the second photo you can see where I stood up two of the posts, hopefully I'm able to get the four posts stood up and grouted and the 4" x 12" set in them before the end of the year. I know I won't get to framing this year. 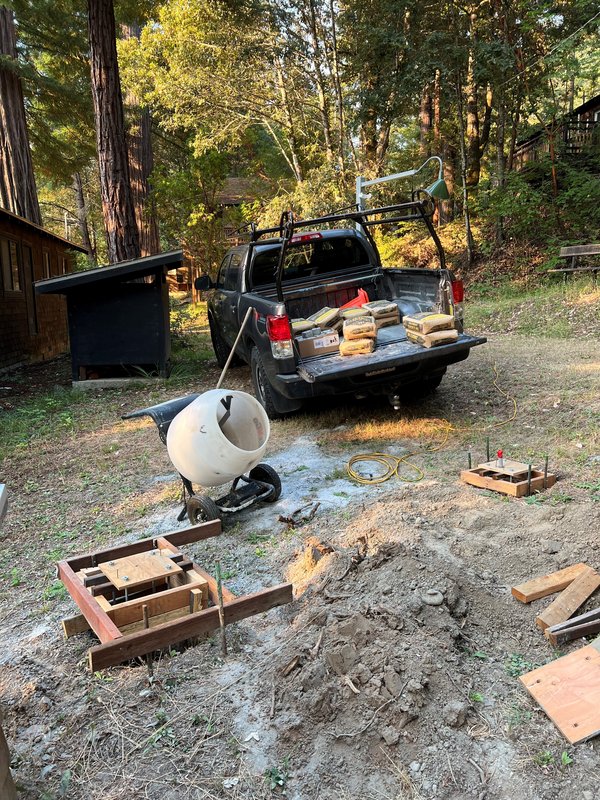 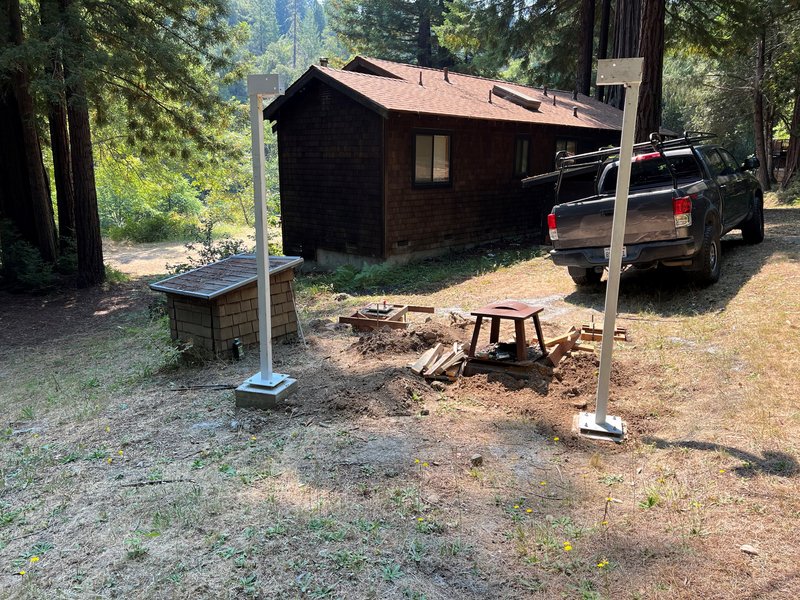 Over 4th of July weekend I attempted to pour footings for a gazebo like structure I've had in the works for the last 8-10 years. Hard to believe it's been that long, but it keeps getting put on the back burner while I work on other stuff up there. But over 4th of July weekend we had planned to be up there for three whole days (head up Friday night and drive back Tuesday morning) and the only things on my list were: mow the grounds and work on footings...

I had a number of setbacks while working the biggest being the rain. It rained a bit one morning while I had concrete in the back of my truck which ended up basically turning the actual bags into mush, so when I attempted to pull them out of the truck they just disintegrated and concrete went everywhere. Man I was pissed, not only was the concrete expensive ($10/bag up there) but now I didn't have enough to finish my project. If I remember correctly six of the bags were lost in the weeds. I tried to scoop some of it up but it was pretty much a write off. So I was only able to pour two of my footings. 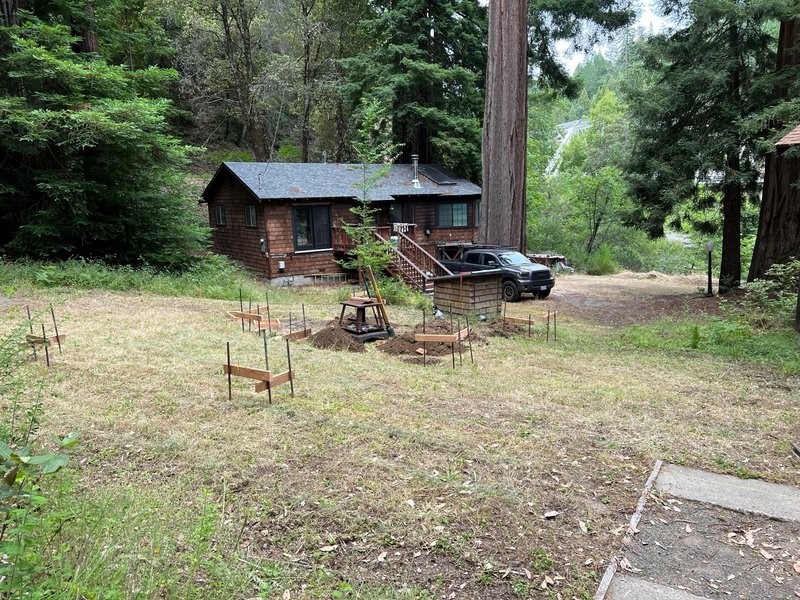 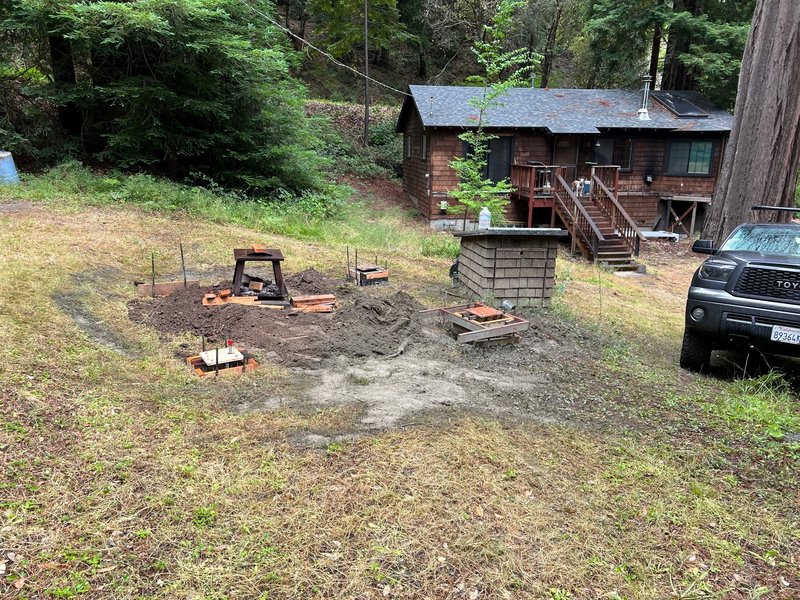 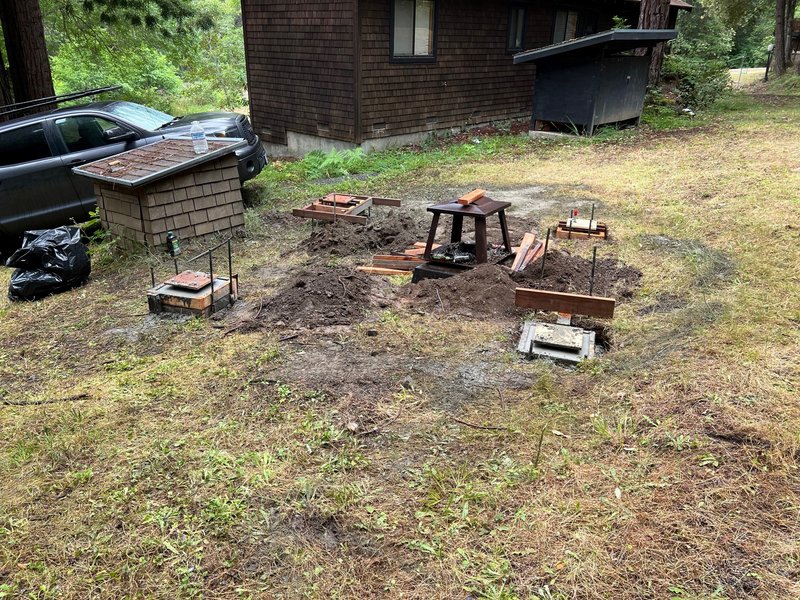